Bordered by the Atlantic and Indian Oceans, South Africa is a vast land often called ‘a world in one country’. Its landscapes stretch from tropical white-sand beaches to snow-capped mountains and include spectacular views and wildlife-filled national parks and reserves. The current Rand/GBP/USD exchange rate means that South Africa’s most luxurious properties are half the price they would be in other parts of Africa, although the safaris here are not as wild, they do offer some of the world’s most luxurious lodges and camps and the game viewing is still excellent. Head to the Waterberg for some time on a completely private reserve – walk with Rhinos and gallop through the bush. The Kruger and Sabi Sands is by far the best place in Africa to see Leopard – follow this with a wonderfully delicious stay in Cape Town, touring the Winelands, whale watching in Hermanus and driving the stunning garden route. If you have time the wild coastline of Kwa Zulu Natal is also magical. There is so much to see and do here but make sure you do not pack too much in. The country has a wealth of natural beauty, pristine wilderness areas, warm and friendly people, cosmopolitan cities, and excellent infrastructure – making South Africa a favorite safari destination. 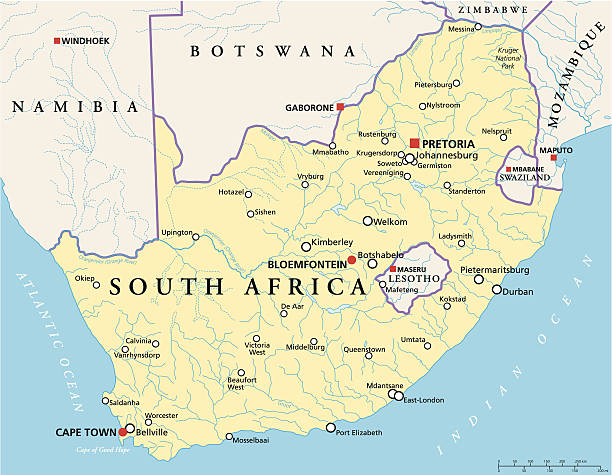 Highlights of a South African safari holiday may include visiting the vibrant city of Cape Town, overshadowed by the imposing Table Mountain; taking in the gastronomic delights of the surrounding Winelands area; enjoying a classic wildlife safari in any of the ‘Big Five’ private reserves that fringe the Kruger National Park; hiking in the wild landscapes of the Drakensberg Mountains or exploring the beaches and marine reserves of subtropical KwaZulu-Natal.

Contact us now to speak to one of our travel experts

012 993 2870
mail@holidaytourafrica.com
Request a callback
THINGS TO SEE AND DO IN SOUTH AFRICA
Kruger Park Safari
× 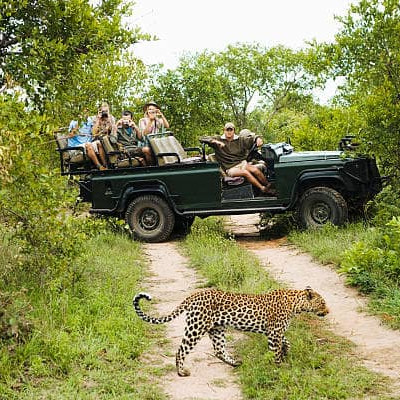 Situated in the northeast area of the country, it is probably the most popular attraction in South Africa, offering the chance for unforgettable safaris. It is indeed one of the largest wildlife reserves in Africa. Here you can find all the Big Five, lion, rhino, leopard, elephant and buffalo, as well as many other animals.

Make a Booking
The Drakensberg
× 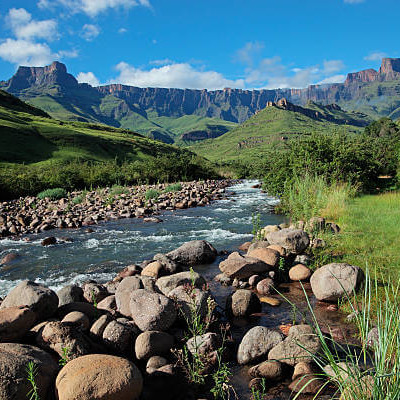 The Drakensberg mountains are the highest mountains in southern Africa, and they occupy part of South Africa and Lesotho. Several rivers flow from these mountains, including Orange, Vaal and Tugela. The highest peaks are Thabana Ntlenyana in Lesotho and Njesuthi in South Africa. This mountain range is a challenge for mountain climbers from all over the world. The mountains are made of basalt in the upper layers and sandstone in the lower parts. 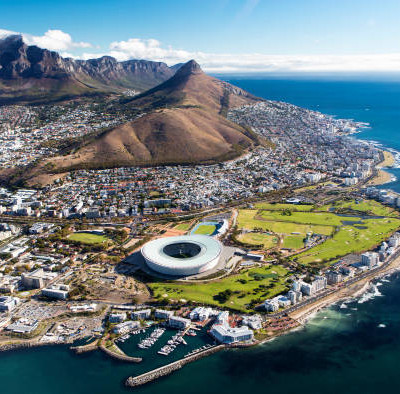 Cape Town and South Africa, Known as the 'Rainbow Nation,'have a long and complicated history involving a multitude of ethnic and cultural groups. The area's history starts with the indigenous Khoisan and Bantu people, who were the primary residents of the area until the Portuguese and Dutch arrived in South Africa, beginning a centuries-long occupation. located on a peninsula in southern South Africa and dominated by the iconic Table Mountain, whose summit can be reached by cable car, admiring the panorama of the city with the unique City Bowl. Apart from the lively V&A Waterfront, full of restaurants, bars and shops, do not miss the visit to Robben Island with the prison where Mandela was held, and the magnificent Kirstenbosch Botanical Gardens. For those who wish to get to know the multethnic side of the city, a stop at the colourful Bo Kaap or Cape Malay quarter is recommended: the quarter is inhabited by Asian and Muslim minorities. Natural attractions include, besides the beautiful beaches, Lion's Head, Devil's Peak and Signal Hill. 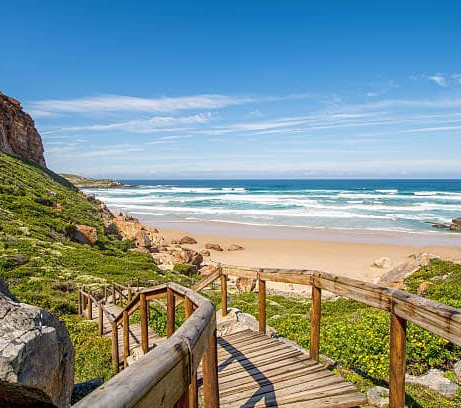 Here we are in Knysna, an elegant seaside town in the Western Cape province, another interesting stop along the Garden Route. Knysna is famous for the oysters, served in delicious dishes in the restaurants overlooking the Indian Ocean. The city lies on a picturesque lagoon, encompassed by two hills, Knysna Heads, where Knysna River flows into the ocean. 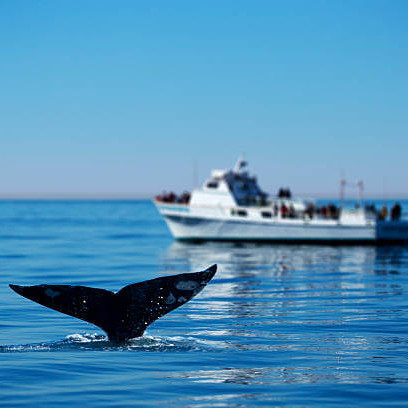 Hermanus is the town of whale watching! Formerly known as Hermanuspietersfontein, the village shortened its name in 1902 to Hermanus. Over the years the small fishing community of the rugged South Cape coastline has grown to become one of South Africa's most well-known and loved destinations. The Voëlklip and Grotto Beaches offer unparalleled views of the ocean, while the Old Harbor Museum encompasses the former harbor, fisherman's hut, and the Whale House Museum. Stop here to see the suspended whale skeleton and other fascinating exhibits. Located in the Western Cape province, it is reached traveling along the Garden Route mainly with the aim to spot whales and other cetaceans from the austral winter to the austral spring in Walker Bay. 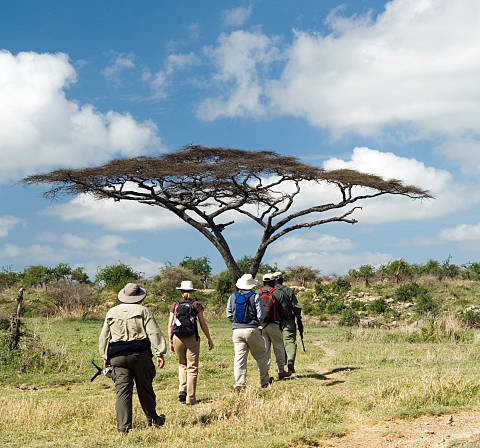 African safaris are changing. As surely as the camera has replaced the hunting rifle, the growing popularity of guided walking safaris has revolutionised traditional game viewing activities. Away from the confines of a vehicle, travellers are now venturing into big game country on foot for anything from an hour's stroll to several days, spending starlit nights at remote lodges or tented camps. 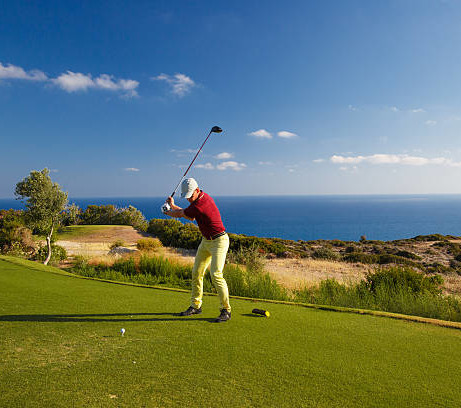 Golf Holidays in South Africa are one of the best kept secrets in the golfing world. It is blessed with year-round sunshine and good weather, phenomenal natural beauty in the countryside, spectacular beach and bush scenery, and of course the friendliest local people and diverse cultures. 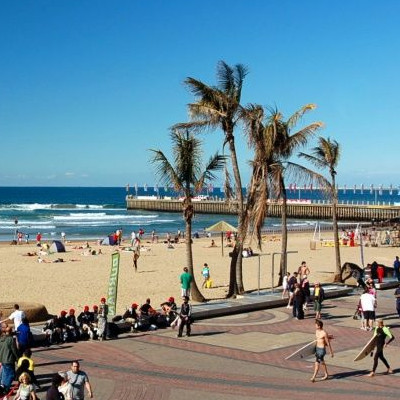 KwaZulu-Natal also referred to as KZN and known as "the garden province”, a province of South Africa that was created in 1994 when the Zulu bantustan of KwaZulu ("Place of the Zulu" in Zulu) and Natal Province were merged. It is located in the southeast of the country, enjoying a long shoreline beside the Indian Ocean and sharing borders with three other provinces, and the countries of Mozambique, Eswatini and Lesotho. Its capital is Pietermaritzburg, and its largest city is Durban. It is the second-most populous province in South Africa, with slightly fewer residents than Gauteng.

Two areas in KwaZulu-Natal have been declared UNESCO World Heritage Sites: the iSimangaliso Wetland Park and the uKhahlamba Drakensberg Park. These areas are extremely scenic as well as important to the surrounding ecosystems Lapped by the Indian Ocean, the KwaZulu-Natal coast is a paradise of warm waters, sun-drenched beaches and lush wonderlands. From the bustling port city of Durban to the trendy resort towns of the North Coast and the sleepy little gems of the South Coast, this sunny South African region offers the perfect mix of natural beauty and tourist infrastructure. With its long stretch of golden sand beaches, warm waters and tropical climate, visitors to Durban are offered a seaside retreat unlike any other in South Africa. Founded in 1823 as a tiny trading settlement, Durban now plays host to Africa’s largest port, making it an economic powerhouse. Visitors can stop off for a delectable seafood lunch at one of the charming restaurants set around the harbour and watch as mammoth cargo ships sail by. Durban boasts a variety of world-class shopping outlets as well as myriad charming crafts markets, which dot the beachfronts, offering a delightful way for visitors to immerse themselves in local culture. UShaka Marine World provides insight into the amazing marine creatures that inhabit the Indian Ocean, while an assortment of leisure adventures such as surfing, board sailing and scuba diving is readily available. located along the coast in the province of KwaZulu-Natal in the east, it combines colonial, African and Indian atmospheres. Durban is a lively city, popular for its beaches, uShaka Marine World (aquarium and theme park), Durban Botanical Gardens and the beautiful Golden Mile seafront. Its beaches are appreciated by professional and amateur surfers alike.

South Africa fascinates. A cultural tour will help you understand what makes the 'rainbow nation' so arresting. On cultural tours of South Africa you can buy from artisan producers in the foothills of the Drakensberg Mountains and discover old gold rush towns towards Mpumalanga. Then, there are traditional homestays in Zululand and meetings with the Xhosa on South Africa's Wild Coast. 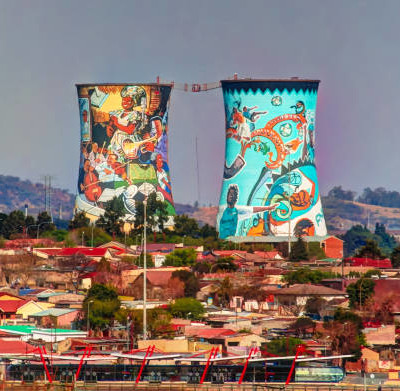 Johannesburg (also called Jozi, Joburg, and Egoli) is South Africa's largest city and the main city of the Gauteng province and one of the world's largest urban areas. The town dates back to 1886 when workers arrived to mine the large deposits of gold. Within a few years, the population of the city had ballooned, with thousands of native African and Indian workers working in the gold mining industry. Due to racial segregation during the Apartheid era, the workers were forced to live in separate townships outside of the city limits. The most famous of these are Soweto (short for South-West Township) and Lenasia, which was home to a large population of South Africans of Indian descent. Several prominent individuals have called the districts home, including Nelson Mandela, Mahatma Gandhi and the comedian Trevor Noah. In the Soweto district it hosts a popular street called Vilazaki Street, where one would see the former homes of Nelson Mandela and Bishop Desmond Tutu and visit the Nelson Mandela Museum. Along the way, you'll pass street vendors selling fresh fruit, snacks, and various African arts—the perfect excuse to stop for a mid-afternoon treat and a quick shop for souvenirs. the Apartheid Museum and the former prison of Constitution Hill. You can also visit Johannesburg Zoo, Herman Eckstein Park and Johannesburg Art Gallery. 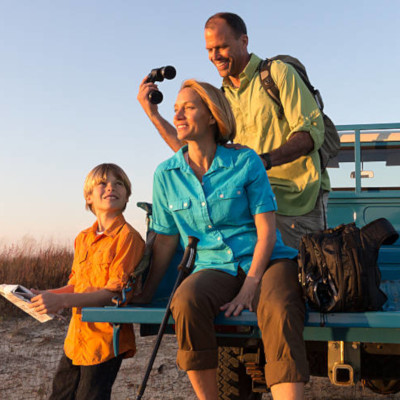 Most of us here at Travel2Africa have children and have travelled widely with them in Africa, so we really do know what works when it comes to planning a family safari. We know which camps have guides that truly engage children of all ages, at which they will learn to make bows and arrows or about conservation or get an authentic glimpse of tribal culture. 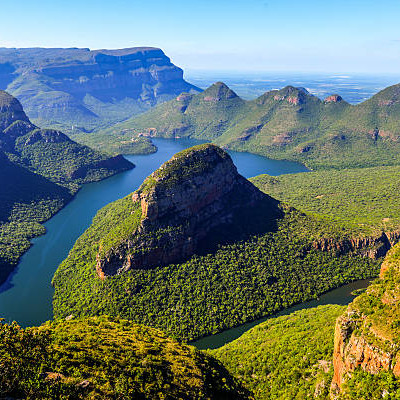 The Blyde River Canyon is a canyon in the Mpumalanga province and is the third largest in the world, 26 km long and 800 meters deep. It's situated within the Drakensberg mountain range and is made of sandstone. It was dug over millennia by Olifants and Blyde rivers and today it hosts the spectacular Three Rondavels, three rock formations recalling three huts (this is the meaning of the word "rondavel" in Afrikaans). Another popular site in Blyde River Canyon is God's Window panoramic point. offers spectacular scenic beauty with attractions including Bourke's Luck Potholes, The Three Rondavels and God's Window. Exciting adventure activities in the area include quad biking, river rafting, kloofing, microlighting and hot air ballooning.

Make a Booking
Chat with us on WhatsApp
X
Hi there! Click one of our representatives below and we will get back to you as soon as possible.
Travel2Africa Consultant
Hugo