In South Africa, certain period of the year are better suited than other for touring. We highly recommend to avoid the rainy season which normally takes place in between the month of November and until the end of January.

It is of importance to note that all bookings during the holidays season must be done quite in advance. These holiday includes, "School Holidays", "Easter", "Christmas & New Year", or on any other National Holidays

It is also important to note that during the summer the temperature and humidity in the Natal region can reach levels that will make your stay very uncomfortable at time.

Otherwise, the weather is consistent throughout the year and you can expect some great sunny day during your visit in any of the South African region. It is also very unlikely that your visit will be interrupted by rain. We do experience occasionally some late afternoon storm that cool down the atmosphere during long period of heat and we do enjoy it.

South Africa is most known for its cool sunshine temperature throughout the year. It's a quite dry country so to say, with an average annual rainfall of about 464mm compared to a world average of about 860mm.

With the exception of the Western Cape which is a winter-rainfall region, the rest of the other regions in the country generally get most of its rainfall in summer. Temperatures in South Africa are initially lower than in other countries at similar latitutes such as Australia due mainly to greater elevation above sea level.

On the interior plateau, the altitude Johannesburg lies at 1 694 metres, which keeps the average summer temperatures below 30°C. In winter for the same reason, night time temperatures can drop to a very freezing point, and lower in some places. Being in the southern hemisphere mean our seasons stand in opposition to those of Europe and North America, here in South Africa we spend Christmas on the beach. 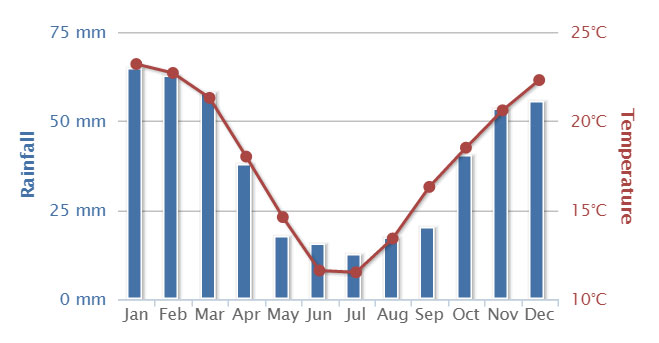 This is the season where we spend most of our time swimming and having fun outside. For the most part of South Africa, summer (mid-October to mid-February) is characterised by hot, sunny weather, often with afternoon thunderstorms that clear quickly, leaving a warm, earthy, uniquely African breeze. It’s only the Western Cape excluded here since most rainfall is experienced in winter, because of its Mediterranean climate.

This time of a year is relatively the coolest season, with a mixture of a little hotness and a little coldness, its warm throughout the country except in the Western Cape where autumn is hot, sunny. Autumn (fall) in South Africa (mid-February to April) offers the best weather in some respects. Very little rain falls over the whole country, and it is warm but not too hot, getting colder as the season progresses.

Most regions of the country it’s dry, crisp days, cold nights with low temperatures throughout this season, sometimes with heavy frosts. Winter in South Africa (May to July) can be really freezing especially in the evening and mornings, and it’s cool during the day. It's a good idea to bring warm clothes.

The hot, moist KwaZulu-Natal coast, as well as the Lowveld (lower-lying areas) of Mpumalanga and Limpopo provinces, offer fantastic winter weather with sunny, warmish days and virtually no wind or rain. The high mountains of the Cape and the Drakensberg in KwaZulu-Natal usually get snow in winter.

The Western Cape gets most of its rain in winter, which sometimes brings so much coldness, with quite a few days of cloudy, rainy weather. However, these are always spread with wonderful days to complete with the best of a British summer.

For the most part of the country, this season is a recovery season where plants are recovering, getting greener leaves, and flowers brightening up like a rainbow. It’s also a shift from those winter cold temperatures to a much warmer season with rainfall towards the end of the season Nowhere in South Africa can you get a spring (August to mid-October) more spectacular than in the Cape provinces.

Chat with us on WhatsApp
X
Hi there! Click one of our representatives below and we will get back to you as soon as possible.
Travel2Africa Consultant
Hugo